Sergey Kazantsev's Gallery and Park in the Moscow region 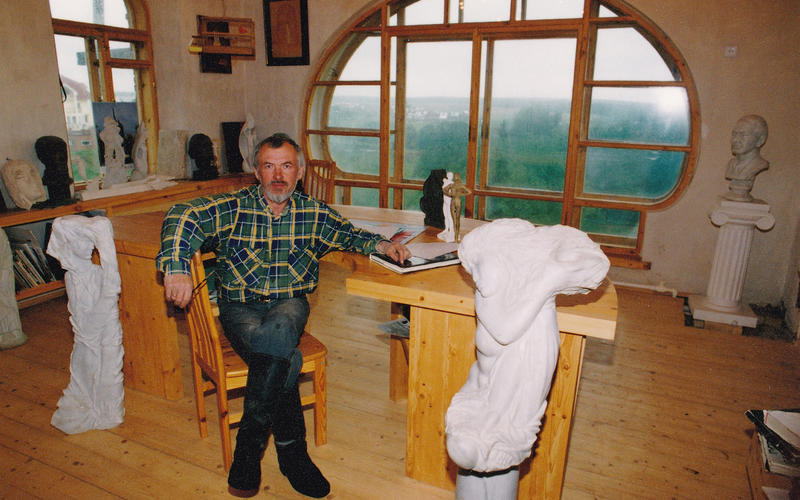 Construction of the “Art Temple” by Sergey Kazantsev (Continued)

From the memories of the sculptor

The gallery is designed in the style of an Orthodox church, which means a lot to me. The powerful foundation of the gallery was essential for me to easily perform hefty tasks and the glass wall from the floor stretched upward extended into the dome. The entire structure of the gallery, according to the project, rests on four 12-meter brick arches with reinforced-steel masonry, supporting the building with maximum strength, despite the perceived weightlessness.

Over time, the glass wall had to be rebuilt. In the 90s with building materials were extremely difficult to get. There were no nails to buy! To think of buying a double-glazed window from Italy, it was a lengthy job to go personally through customs. For this reason, I decided to build a glass wall by myself, with enthusiasm and improvisation. In the end, the design was not solid, improper, the windows did not open properly and were very hot and noisy inside. Later in 2002, I replaced the glass wall with a stone wall fixed with large windows. Built-up balconies, inside and out. In the same year, I plastered the structure and painted with green and white, since then the gallery stands in the same shape.

As for the interiors, my relatives helped me. The design of the office and bedroom on the third floor was handled by the wife Natalia. Thanks to her, the halls of the gallery were always decorated with living tropical plants in huge clay pots, which sometimes made the hall look like a greenhouse. A close friend from St. Petersburg, painter Vladimir Borodin painted the walls on the second floor in the reception hall. There, the middle daughter Catherine painted the ceiling, and she also was engaged in the design of stained-glass windows in the kitchen. Furniture, windows, carved partitions, and wooden doors were made according to my sketches by professional carpenters. The main work on the construction and design of the gallery was completed by the beginning of the 2000s. 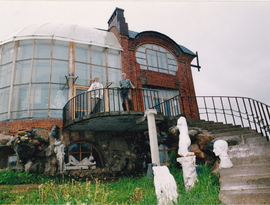 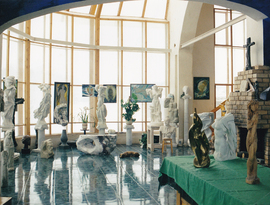 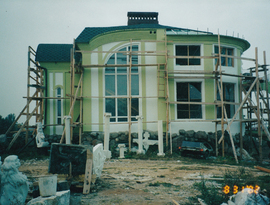 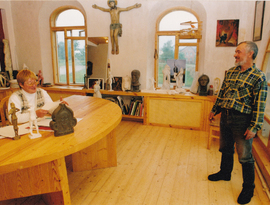 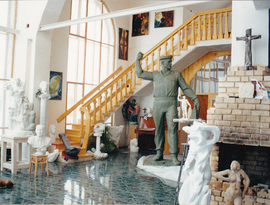 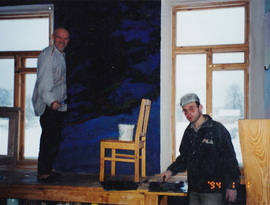 Of course, with the move to a new spacious workshop, my work also changed. Large spaces give the artist flexible ease. By working here, I can directly measure my vision following the hight and space. The series "Seasons" with the four images of female figures I made several times. You can compare the transformation of the sculptures made in the small workspace of Moscow with others that I made in the open workspace. Female images, their personifications have become freer, more graceful, and flexible in the suburb workshop. The new workplace enabled me to achieve my most ambitious ideas – the three-meter “Trinity” (2008) and the four-meter “Fire” (2014) made of Pashtulim marble. The pure marble three meters tall “Apple Tree” and a unique work “Muse and the Creator” (2018) sculpted from four-meter blocks of Italian Carrara marble. So, no doubt, the magic of space exists and dictates its laws, influencing the consciousness of the artist.

“If earlier, while I was working in the city walls, I could only “guess” about dimensions but now I feel like a living part of it”, – from an interview with Sergey Kazantsev in March 2001 to the Warm House magazine