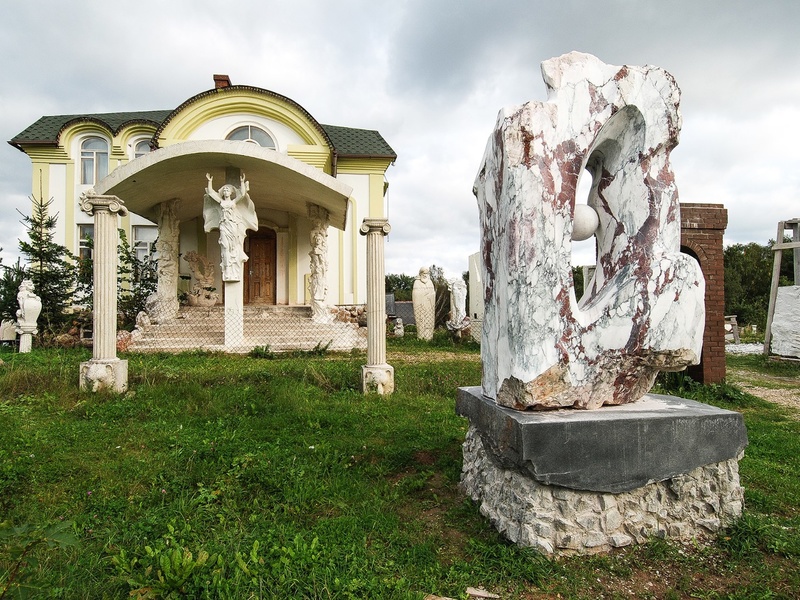 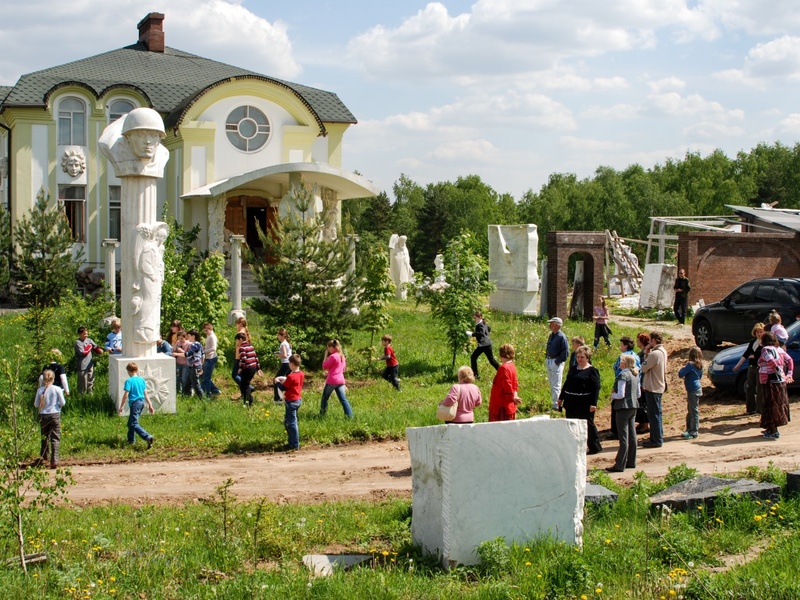 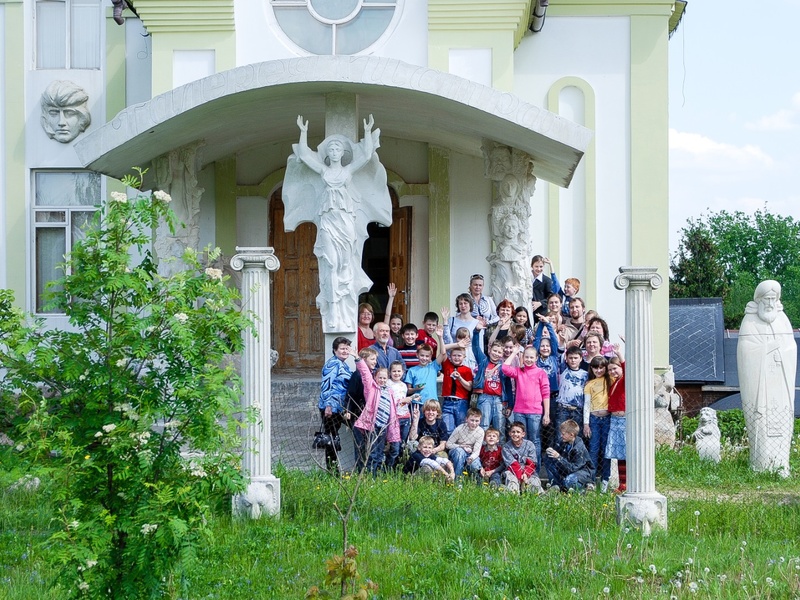 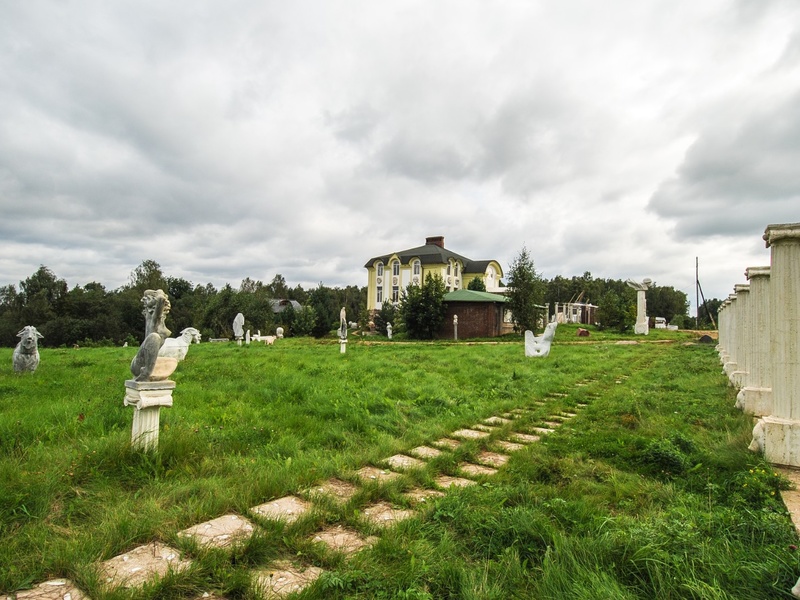 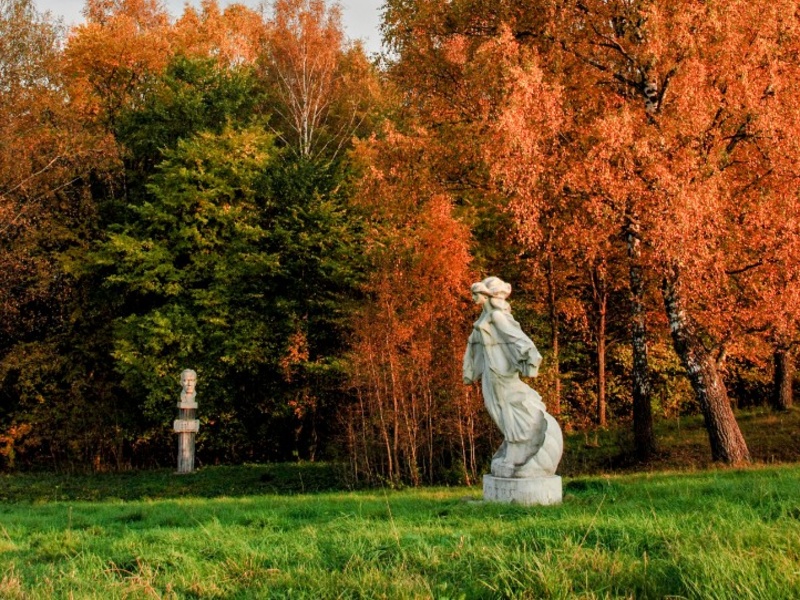 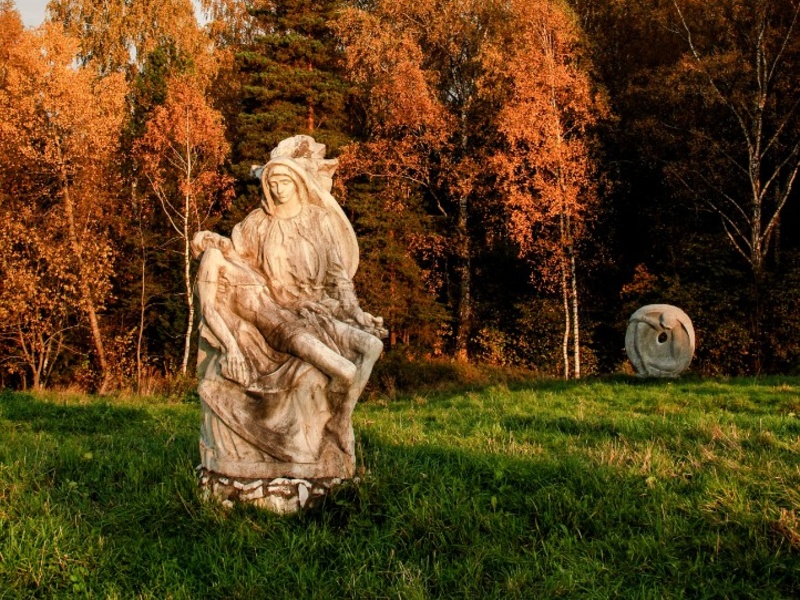 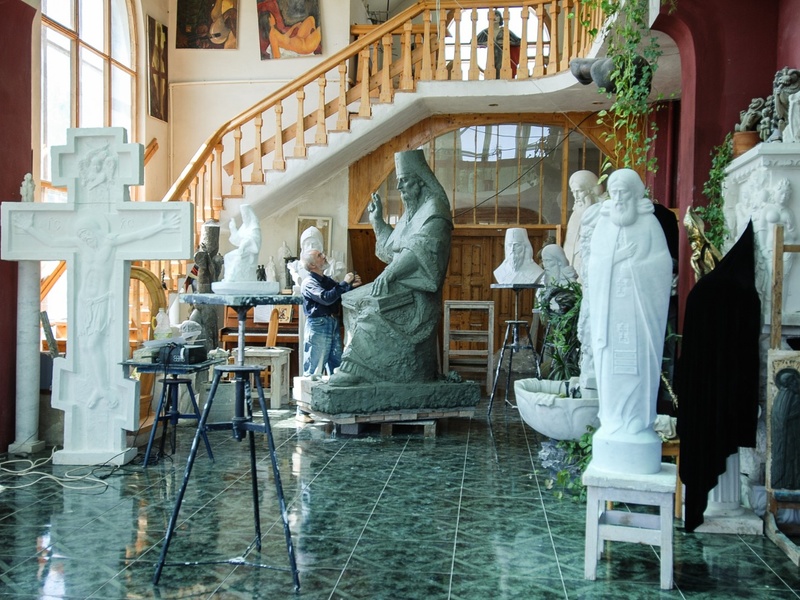 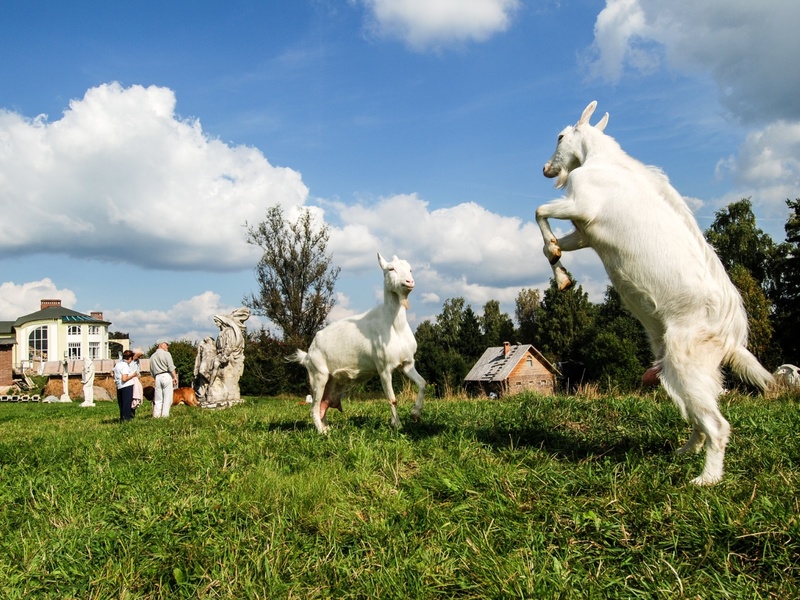 Sculptor Kazantsev dreamed all his life to make his own park and gallery. In 1991 Sergey received from the administration of the Istra district one hectare of land in the picturesque hill near the forest, 300 meters from the Istra River. In 1993, the construction of the gallery began and lasted five years. At the entrance the building of the gallery looks like a temple. The ground floor is laid out of huge boulders. White Greek column-lines indicate the boundaries of the park

Construction of the Gallery of the sculptor Sergey Kazantsev

Everything I built by myself

When I earned 20 thousand rubles - I was able to buy cement then mixed it up by myself, bought a hundred bricks and laid bricks by myself. Sometimes he hired assistants.

A quarter-cube tub of cement two workers did for half a day. But with me – one-one and half hour before the breakfast. I presented a marble sculpture to a neighbor-builder and he sent an excavator for digging up a pit for the building. I helped the Military Unit with the territory design and they supported me with the crane.
I used huge boulders from a neighboring sandpit for the construction of the basement floor. At that date no one paid any attention to them.

Boulders in sandpit were like an waste material, garbage, I did not have any competitors, and for $ 100 I could buy an a whole Kamaz-truck of boulders. My neighbors probably thought: what kind of oddity began to live here? As a result of this feat I built up the ground floor in 4 years.

Excellent journals were published in the Soviet Union

"Artist", "Art", "Decorative Art" from which we got knowledge about achievements in World Culture. In one of the journal I saw the pictures of the millionaire’s countryside villa in America, which was built on a cliff over a waterfall, this idea I really liked.

I did not have any cliff, so I fond granite boulders. I also wanted to have a lot of light in the workshop, so I decided to make one wall and part of the ceiling glass. In Russia at that time there was no necessary materials, there was practically no access to the nails. 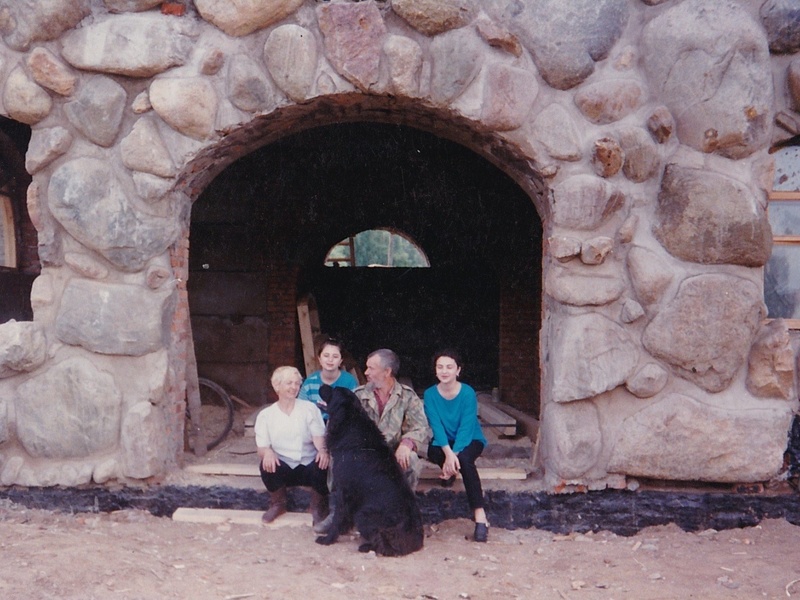 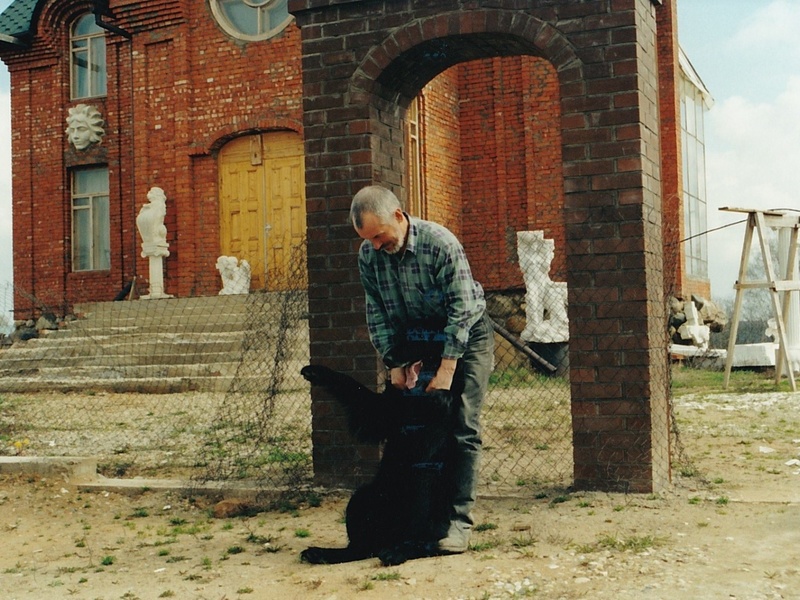 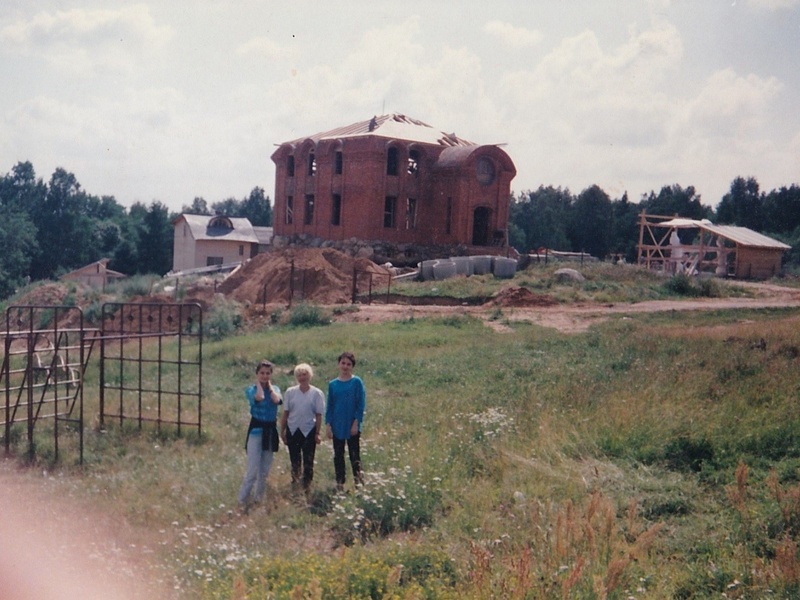 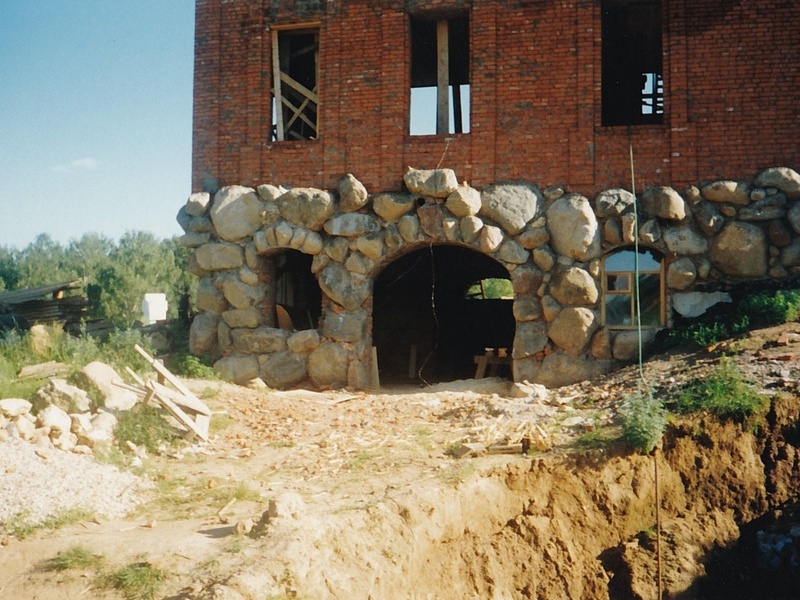 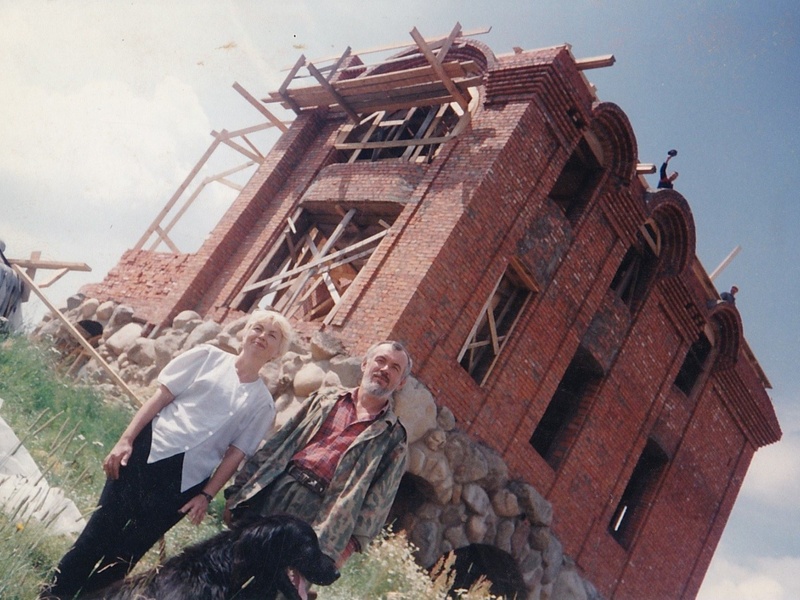 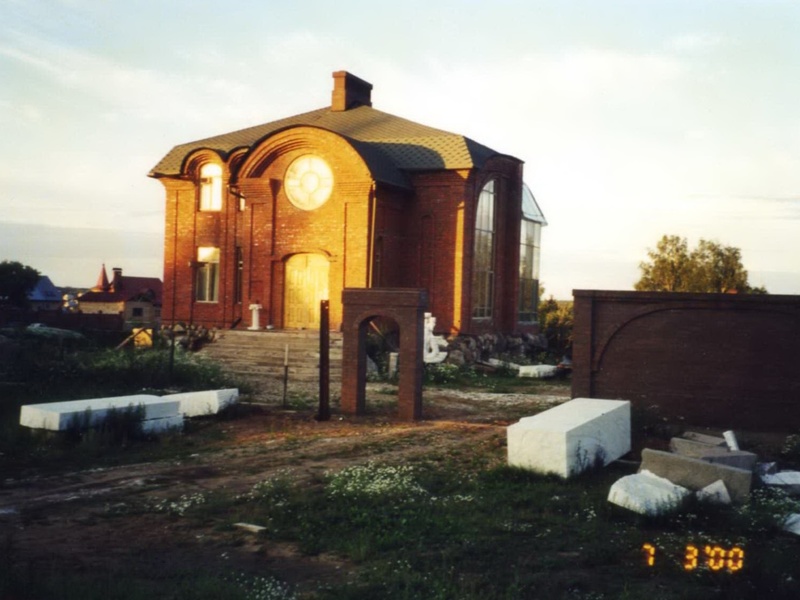 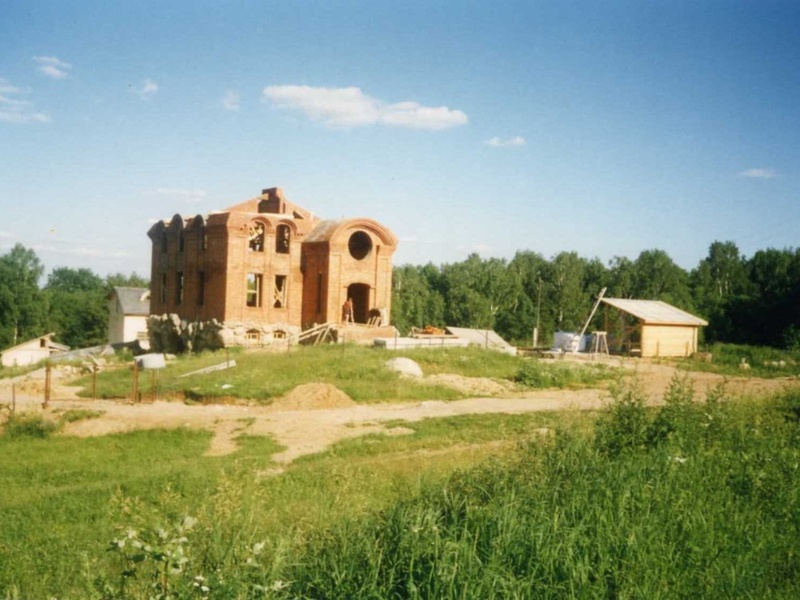 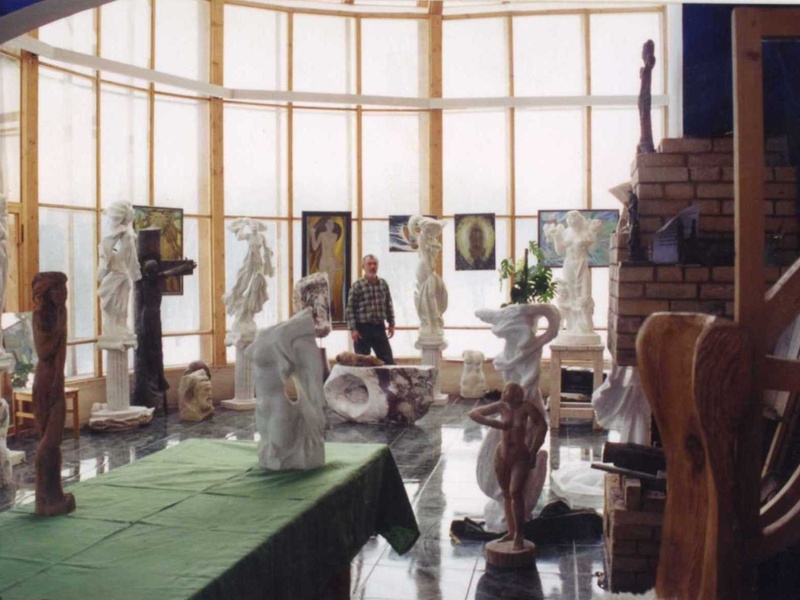 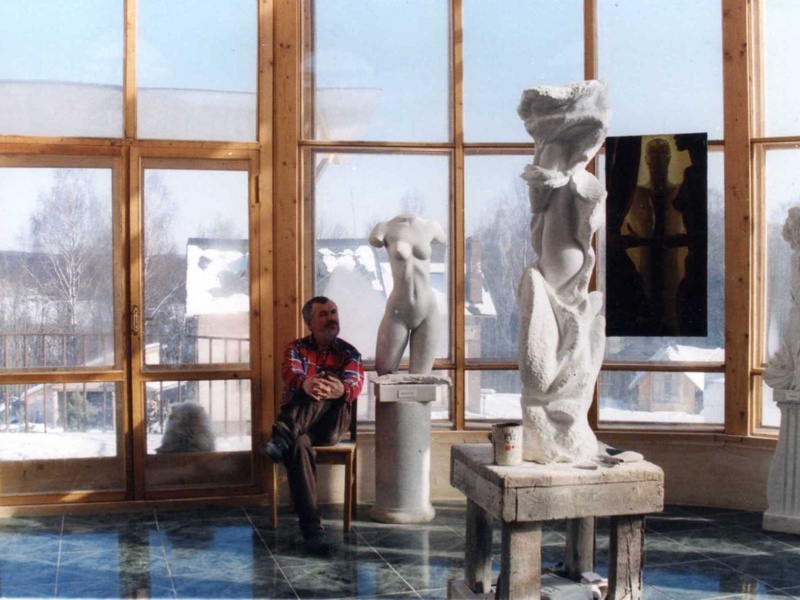 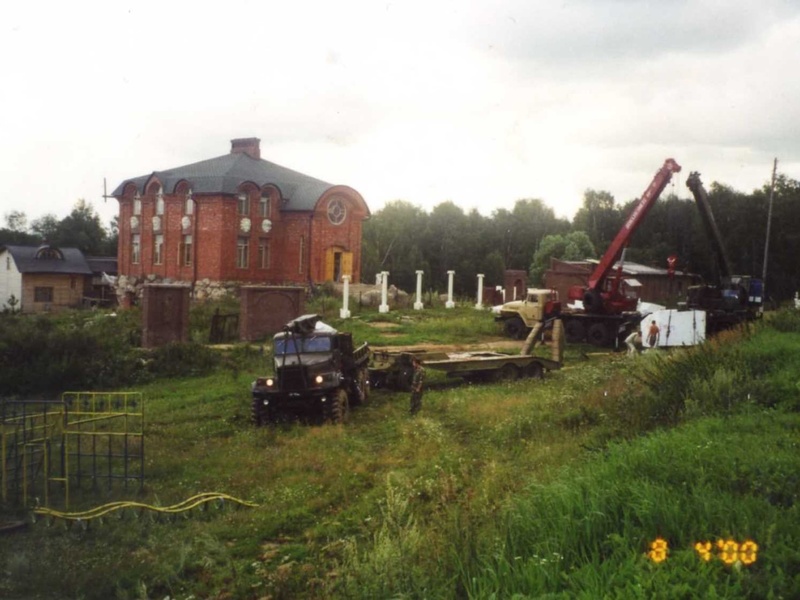 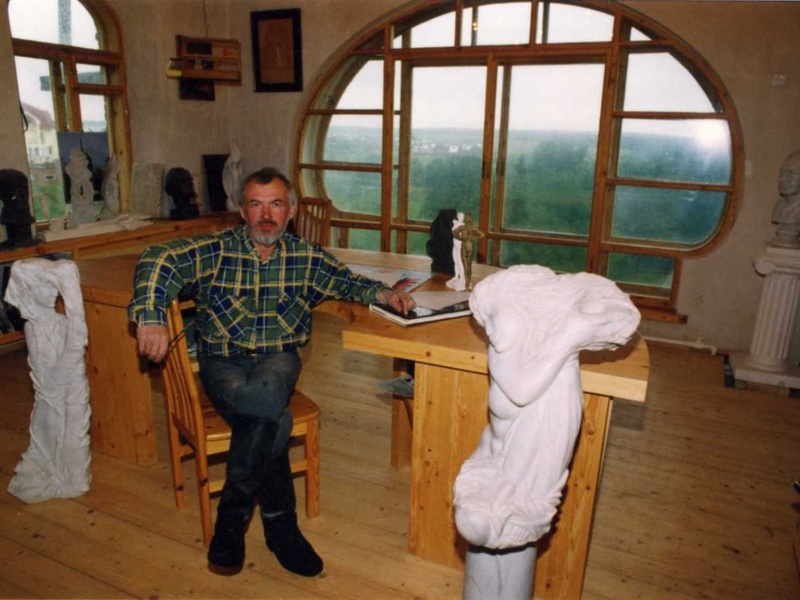 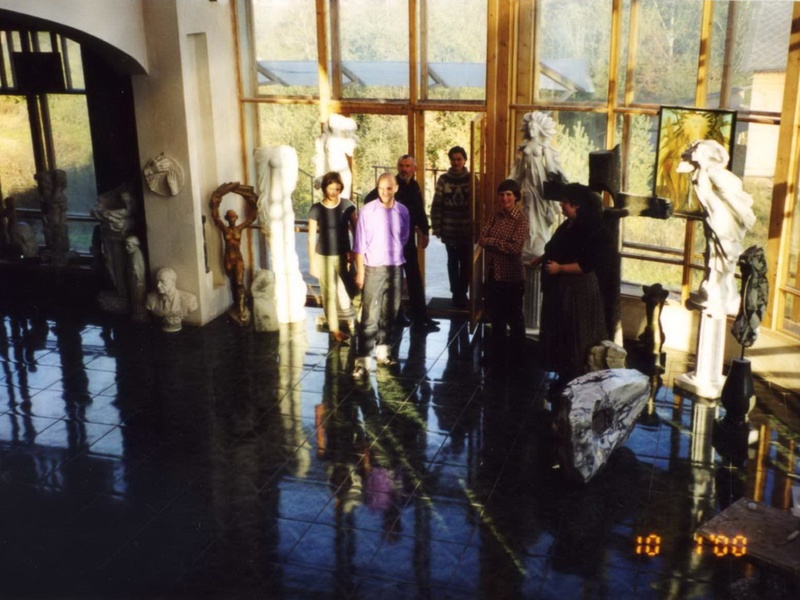 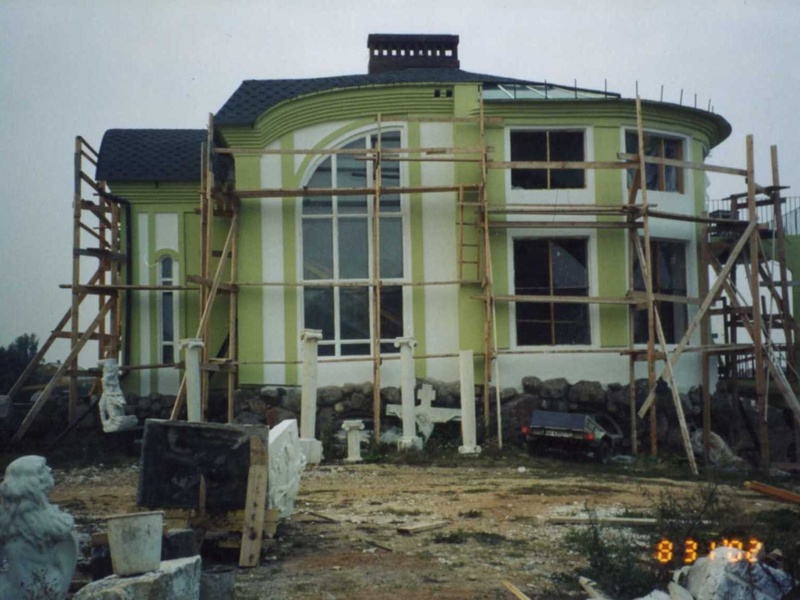 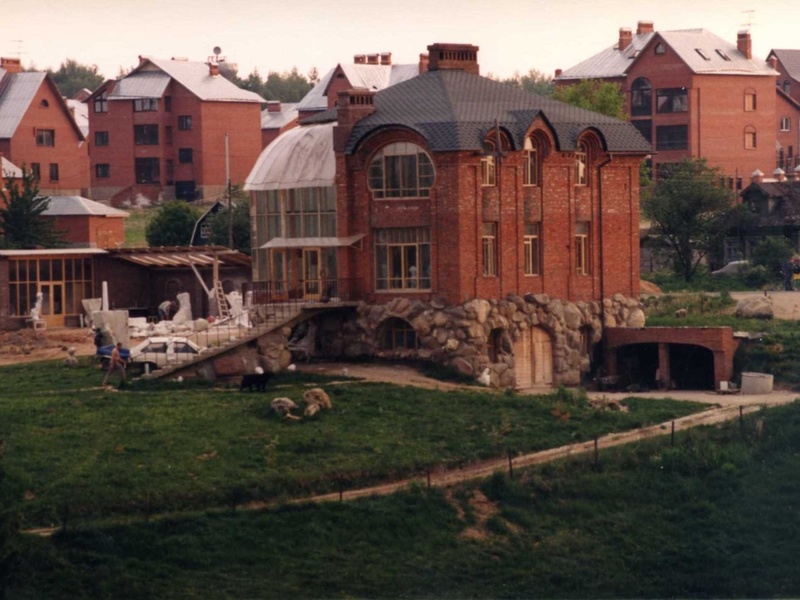 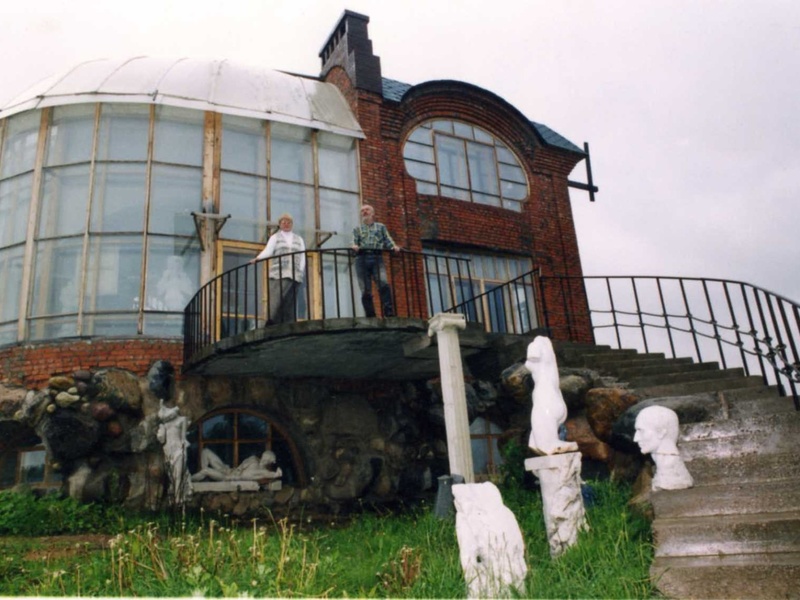 In the early 90's to find building materials was almost impossible. To complete the construction of the Living house, I needed 10 logs. I searched for them for 20 days. I wanted to build a glass wall. But the multiple glazing I could buy only in Italy. And for transportation into Russia I had to negotiate with the custom-house. For these reasons, the glass wall I was created by myself, from wood, on the great enthusiasm from improvised materials.

The built construction was not strong, it was unprofessional, the windows did not open, it was very hot and noisy inside the gallery. So I had to replace it in a few years (around 2003), put brick walls with large windows. The architecture of the gallery resembles a Christian temple, but without a cupola. Now I'm working in the gallery and I see that it's done well. Construction fixed well, the width of the arch is 12 meters, all hand-made, again from improvised materials.

Publications about Kazantsev’s Gallery and Park

2001 – Magazine "Warm Home"- 3/2001, p. 18-25, in Russian
Very informative article describes how sculptor S. Kazantsev built his gallery, the big plus of this article is that the interview was taken from the sculptor by fresh memories. The sculptor built the gallery from 1992 to 1997. The article was published in 2001 Открыть публикацию PDF

2009 – Newspaper "Pensioners of the Moscow Region", September 10-16, 2009, p. 15-16, in Russian
The article tells about the Park of the sculptor S. Kazantsev, and that the artist plans to donate the park and a gallery to Russian state Открыть публикацию PDF

2010 – Newspaper "Daily News Podmoskovye", June 1, 2010, p. 8, in Russian
22/5/2010 a theatrical performance "Creative work of Sergey Kazantsev on the land of Istra" was performed in the Sergei Kazantsev’s Gallery. This event occurred as part of the celebration of the Days of Slavonic Literature and Culture. The performance was prepared by the collective of the intellectual school club "April" and their leader Veronica Maslova Открыть публикацию PDF   Открыть сценарий вечера PDF

2010 – Magazine "Podmoskovye", №9 (57), September 2010, p. 40-47 г.
The article tells about the Park of the sculptor S. Kazantsev, and that the artist made a generous gift to Moscow region. He handed unique sculpture park in the Istra to municipal government Открыть публикацию PDF

Video about Kazantsev’s Gallery and Park

2018 – TV program "Without banknotes", TV channel "Moscow 24" April 7, 2018
The charismatic presenter of the program met with the sculptor S. Kazantsev, asked questions, worked with marble, wished the artist: «I want to tell you many thanks that you are making such a park! It is clear, that we need to come here not only in winter, but also in summer … Long years to you, creative success. And let your dream come true!» https://www.youtube.com/watch?v=ngKqP5ckNSo&t=156s